The Global Coral Reef Research and Development Accelerator Platform (CORDAP) is a United Nations G20 Nations initiative started by the Saudi Arabian government aimed at fast tracking solutions to saving corals globally (https://cordap.org/). This is an extremely ambitious initiative because it is also focused on saving the world’s cold-water corals too, a group of organisms that scientists know relatively little about. Both tropical and cold-water corals and reefs are particularly threatened by global climate change, besides localised pressures. CORDAP’s mission is to bring together the best minds worldwide, in a transdisciplinary approach, to accelerate international research and development to supply the technologies and innovations required to secure a future for corals and reefs. The platform was initiated in 2020 with commitments from 16 of the G20 countries. As a G20 country, South Africa’s Minister of Forestry, Fisheries and Environment (DFFE), Barbara Creecy, voluntarily pledged the country’s support. The Oceanographic Research Institute, with DFFE, has been involved in two years’ worth of weekly discussions and negotiations, as part of the Founding Committee, to develop a governance charter, a framework, and constitution for CORDAP. At the end of 2021, the Founding Committee was dissolved and the Governing Body as well as a Scientific Advisory Committee was set up. ORI sits on the Scientific Advisory Committee which, over the last six months, has been hard at work producing a four-year strategic plan for 2022-2025, to facilitate the funding of proposals that aim to save corals (https://cordap.org/strategic-plan/).

CORDAP has five priorities to achieve its mission to secure a future for corals. These are: 1- to further develop and enhance R&D solutions currently being explored for coral reefs and deep-water coral protection, restoration, and adaptation, 2- to develop new R&D solutions for coral reef and deep-water coral protection, and restoration, 3- to move potential solutions from concept to proof of concept, and from pilot scale to ready for deployment, 4- to develop protection, restoration, and adaptation solutions that can be deployed across the full socioeconomic spectrum and associated stakeholders, aided by a decision support system, and 5- to partner with local stakeholders to adapt and deploy existing R&D tools and approaches to protect, restore, and adapt corals and coral reefs to local conditions.

The Governing Committee and the Scientific Advisory Committee (SAC) recently met in Lisbon, Portugal over two days. This was the first time that a face-to-face meeting was convened, due to the Covid-19 pandemic. Aspects discussed at this most recent meeting involved the responsibilities of the SAC; a run-through of one cycle of operations before a call is put out for proposals; listing the necessary scoping studies and workshops required for facilitating areas targeted for proposal development; the development of linkages and engagements with other national and global coral R&D efforts; as well as discussions and approval of funding policies and first calls for proposals. The interim Executive Director of CORDAP, Professor Carlos Duarte, was also supported by the Governing Committee to continue officially as the Executive Director going forward.

This G20 initiative is novel, as it aims to provide a globally coordinated and funded platform to save both tropical and cold-water corals. It will bolster current initiatives, provide a globally coordinated mechanism to save corals by bringing existing initiatives together in a coordinated way, as well as develop novel technologies to save corals. It will facilitate the development of completely new solutions, as well as the upscaling of current mitigation and restoration techniques and technologies to substantially larger spatial scales that are aimed at making global impacts. Although CORDAP is in its infancy, it has immense potential to make a significant difference to saving corals globally. Whilst we know what is required to save corals and reefs, CORDAP focuses on the development and rollout of novel mitigation technologies rather than addressing the direct threats to tropical and cold-water corals, which is being addressed by other mechanisms such as reducing greenhouse gas emissions.

Sadly, the reduction in greenhouse gas emissions is not being prioritised and practiced with the urgency required to limit warming to 1.5°C, and we will likely see the catastrophic effects of climate change in our lifetimes, as well as an increase in extinctions. Many scientists argue that we are already starting to see this play out. Currently, the world is following a pathway of greenhouse gas emissions that is predicted to result in global average air temperatures increasing by 3.6°C above preindustrial levels by the end of the century! 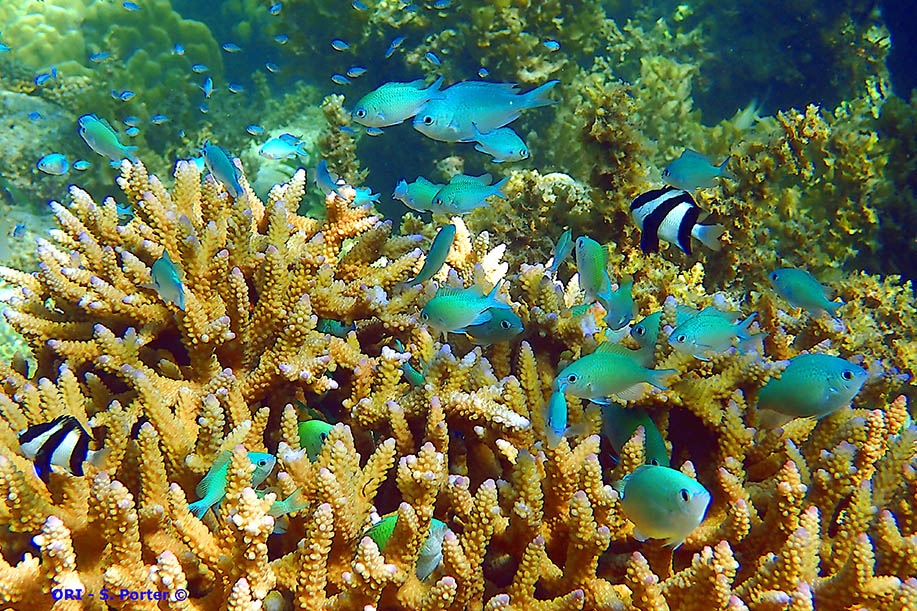 Tropical corals such as these, as well as cold water corals and the reefs, biodiversity, ecosystem services and people they support are under serious threat of extinction within this century, from both global and local anthropogenic threats.