Overall, 87 fish (75%) were caught in the no-take area, which amounted to 9.1 fish caught per angler per hour. In the exploited area, only 29 fish (25%) were caught amounting to 4.5 fish caught per angler per hour. The team recorded 8 fish species in the no-take area and 11 species in the exploited area. The average size of fish caught was generally much larger in the no-take area. Of the 17 fish that were recaptured during the trip, the fish with the greatest distance moved was a black musselcracker that moved 382 m in the Mtentu sampling area. All other recaptures moved less with the average distance being a mere 127 m from where they were originally tagged. This indicates the high level of residency of most reef fish. The fish with the longest time at liberty was a yellowbelly rockcod that had been free for a remarkable 3309 days (9.1 years).

Since the last field trip in April 2019, four exciting recaptures have been reported to the ORI Cooperative Fish Tagging Project. The first was a catface rockcod tagged off Mkambati on the 24 April 2018 and was recaptured off Pumula on 26 May 2019 (moved 90 km and was free for 397 days). The second was a slinger tagged off Mtentu on 19 July 2018 and recaptured deep off Cape Vidal on the 18 June 2019 (moved a remarkable 441 km and was free for 334 days). The third was another slinger tagged off Mkambati on 15 January 2019 and recaptured off Richards Bay on the 5 October 2019 (moved a remarkable 354 km and was free for 263 days). The fourth was a scotsman tagged off Mtentu on the 24 April 2018 and recaptured in the southern controlled zone of the Aliwal Shoal MPA on the 23 October 2019 (moved 139 km and was free for 547 days). All these recaptures provide clear evidence of fish moving out of the no-take zone into fished areas (i.e. spillover) and they also provide evidence that larger adult fish of many species move northwards up the KZN coast in order to spawn. This information is extremely important for the future management of these species. We are very grateful to members of the angling public who report recaptured fish to us as this information greatly assists with our research.

During this field trip the team also managed to tag a third big black musselcracker with an acoustic tag and managed to dive on the deep (30 m) acoustic receiver off Gwegwe and replace it with a new one. The download from this and the other three receivers that they rolled over in June 2019 revealed that many of the acoustically tagged catface rockcod and black musselcracker have been regularly detected. In addition, a number of zambezi and blacktip sharks have also been detected. These results highlight the important information being collected on movements of acoustically tagged fish and sharks in the Pondoland MPA as part of the Acoustic Tracking Array Platform (ATAP).

From this research, it is very clear that the Pondoland MPA no-take area is providing an important refuge for many overexploited fish species. Many popular linefish species such as scotsman, slinger, yellowbelly rockcod, black musselcracker, etc. are much more abundant and of a greater size in the no-take area than in the adjacent exploited area. Some species such as black musselcracker are known to spawn in this area and the increase in juvenile black musselcracker in the exploited area reported by local ski-boat anglers bears testimony to the potential of the no-take area to seed adjacent areas. Similarly, over time we have seen a number of adult fish species, especially scotsmen and slinger leaving the no-take area and moving northwards up the coast presumably to spawn in warmer waters. This provides further evidence of spillover from the MPA, which is helping to enhance fish populations in the exploited areas along our coast. 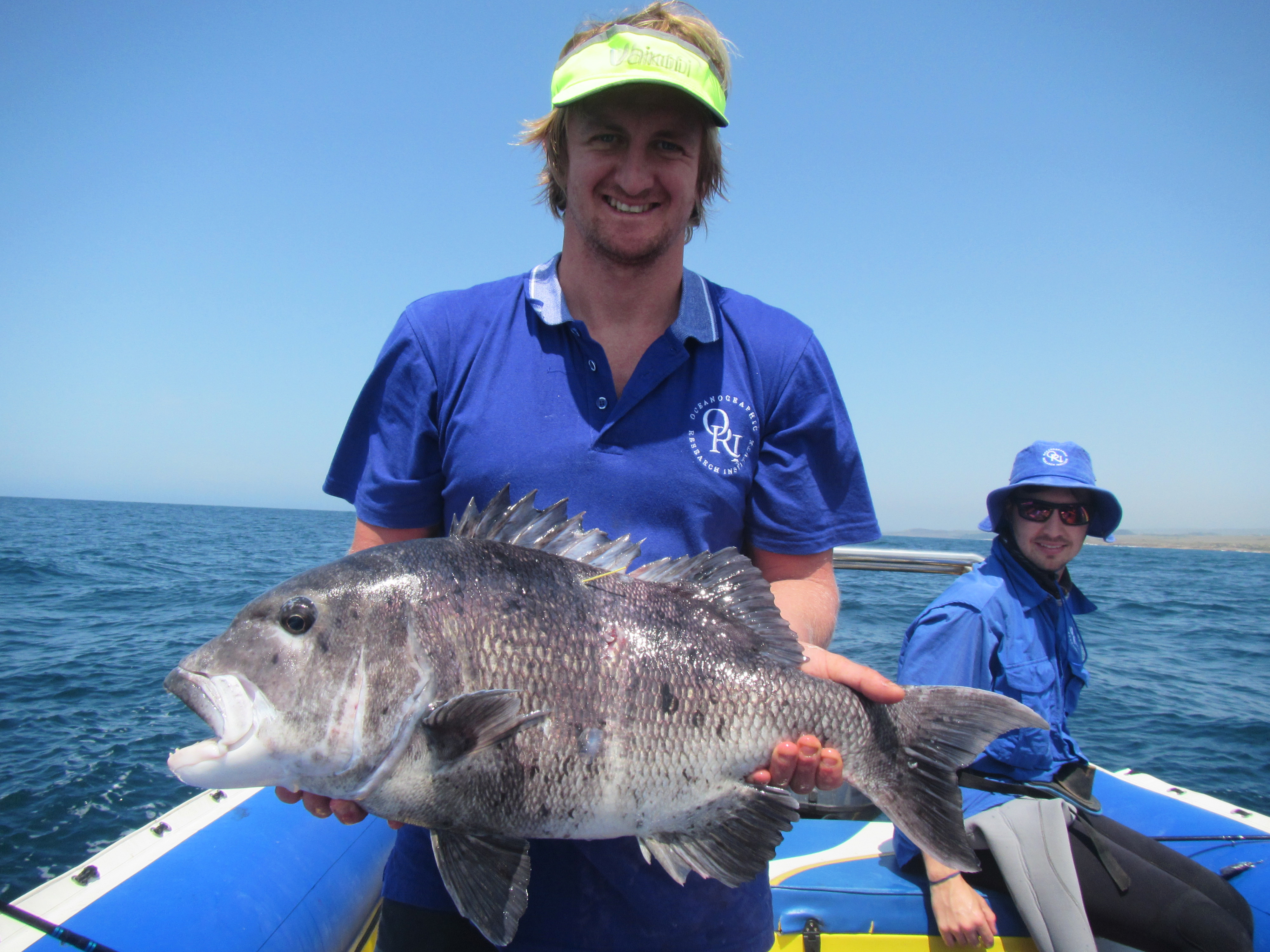