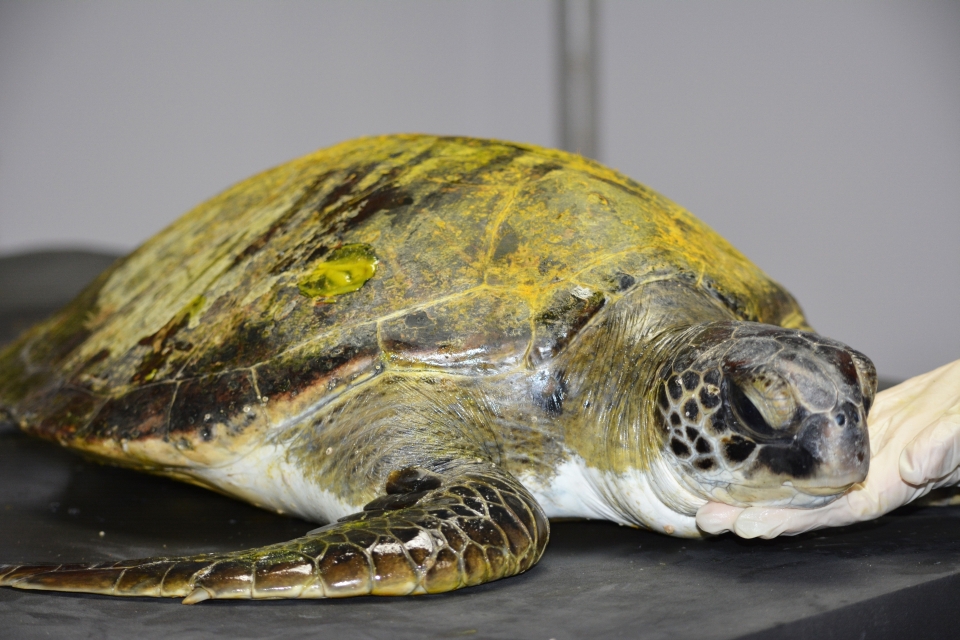 On Saturday 7th September a sub-adult green turtle was admitted to uShaka Sea World after being found on the beach at Mtunzini on the North Coast. On admission the beautiful but exhausted turtle who we named Emily, was rehydrated and left to rest for the weekend.

This morning she appeared sturdy enough to cope with a few non-invasive examinations such as X-rays and an external physical assessment. Blood tests which will only be taken later in the week, will give us a more accurate indication of her condition.

At this stage her condition and behaviour suggest her illness could have been caused by an internal infection, but time will tell.

Being 5kgs underweight might not seem so bad but when your ideal weight should be 15kgs and you are only 9.9kg it is quite serious.

“Reptiles have a very slow metabolism and their rehabilitation is generally a slow and steady process. We are going to proceed with antibiotics, brief swimming periods, fluid therapy and loads of rest for the next a few days. When she is stronger will we start offering her food. At this stage I am cautiously optimistic,” said uShaka Sea World Senior Aquarist, Malini Pather.

Although green turtles nest on beaches in over 80 countries, they do not nest on South African beaches.  They are found throughout the tropical and subtropical oceans and migrate great distances. Unfortunately, their numbers are decreasing and they are currently listed as endangered.

We can all play a role in the protection of not only turtles, but all marine life, by ensuring that we recycle our plastics and say no to single use plastics. Colette BodenstaffBlog, MPAs, SAAMBR, uShaka Sea World0
We use cookies on our website to give you the most relevant experience by remembering your preferences and repeat visits. By clicking “Accept All”, you consent to the use of ALL the cookies. However, you may visit "Cookie Settings" to provide a controlled consent.
Cookie SettingsAccept All
Manage consent