On Monday 8th April uShaka Sea World staff were deeply saddened by the passing of 22 year old Thembeka who has been a part of the seal family at Sea World since she was three months old.

Thembeka was rescued in Port Elizabeth after being separated from her mother as a young pup during a storm.  When she arrived at Sea World with her umbilical cord still attached, she  immediately won the hearts of her carers and was named Thembeka which means Hope. She continued to show strength and determination in everything she did throughout her life.

Thembeka had a gentle nature and went about life at her own chilled pace. She would often fall asleep while waiting for her grand entrance onto stage before delighting and inspiring visitors with her charming presence. But despite her chilled outlook she steadfastly held her ground both within her seal family and behaviourists when she wanted things her way. Combined with the fact that she was incredibly smart, this made her an excellent teacher and we were able to work in creative ways.  You had to earn your kisses from her.

She loved ice lollies and this was the one time when she would move with speed much to everyone’s surprise. She was easily identifiable by her ruffled fur coat and her husky voice which were both quite unique.

Although we will dearly miss her and her quirky ways we will always smile at the millions of special memories of precious moments she has left us. It was an honour to know her and have her in our uShaka Sea World seal family. 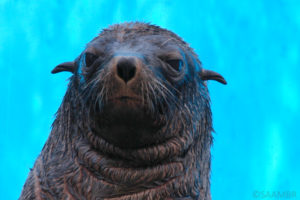