Pemba, the rescued Olive Ridley turtle that was cared for by both the Two Oceans Aquarium and uShaka Sea World, has been traveling the oceans for 365 days! This true seafarer was released on the 8th of March 2018 and has had quite a remarkable journey. She entered the big blue ocean at Mabibi beach in Kwa-Zulu Natal and immediately used the incredible Agulhas current to her advantage and passed the southern most tip of Africa a mere 2 weeks later. During her first month back in the ocean she managed to travel over 3000 kilometres thanks to that mighty oceanic conveyer belt.

She then remained in various smaller currents and eddies, circling around in the southern Atlantic ocean before she headed up the west coast in early May 2018. She moved very closely in-shore between Strandfontein and the Salt River Estuary on the west coast towards the end of May. This area is very rich in mineral sand, and it is interesting to note that Pemba, Yoshi and Noci (other turtles released and tracked by Two Oceans Aquarium) all visited this exact area.

Pemba then decided to move off-shore and headed in a north-westerly direction – at a rather slow pace – and by mid-August she crossed borders and entered Namibian water. She then headed straight for the Walvis Ridge, where she most likely spent quite a bit of time feeding. She continued in an easterly direction, and started to literally cross the Atlantic ocean. Since January 2019 she has been exploring what seems to be the middle of the ocean, and again, we believe she is enjoying spending time in areas offering good food supply. She is currently 1917 km west of Africa and about 251 km south of St Helena Island. Just another 3500 km then she will be off the coast of Brazil, where Olive Ridley turtles actually breed. She is in a very gentle NE current at the moment and in a lovely warm sea temperature of about 25’C.

Over the last year Pemba has traveled an impressive 14 381 km! That is averaging 39.4 km per day. Her fastest month was the month of release, when she was cruising down the Agulhas current at a very fast pace of 145 km per day. September 2018 was her rather slow holiday month, where she moved about 25.5km per day – exploring and feeding along the Walvis ridge.

She picked up the pace again in February 2019 – moving around and about south of St. Helena – at an average speed of 66km/day.

What a fantastic achievement for a rescued turtle who for a very long time could not even dive under the surface of her rehabilitation pool. Thanks to the incredible care and dedication of the animal health and veterinary teams at uShaka Sea World and Two Oceans Aquarium,  Pemba continues to enjoy the open ocean and inspire us all with her determination. She is a true ocean cruiser. 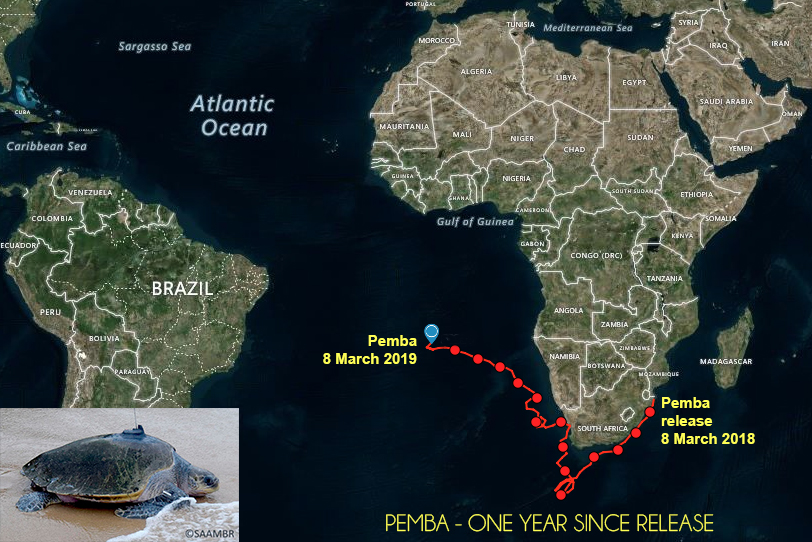 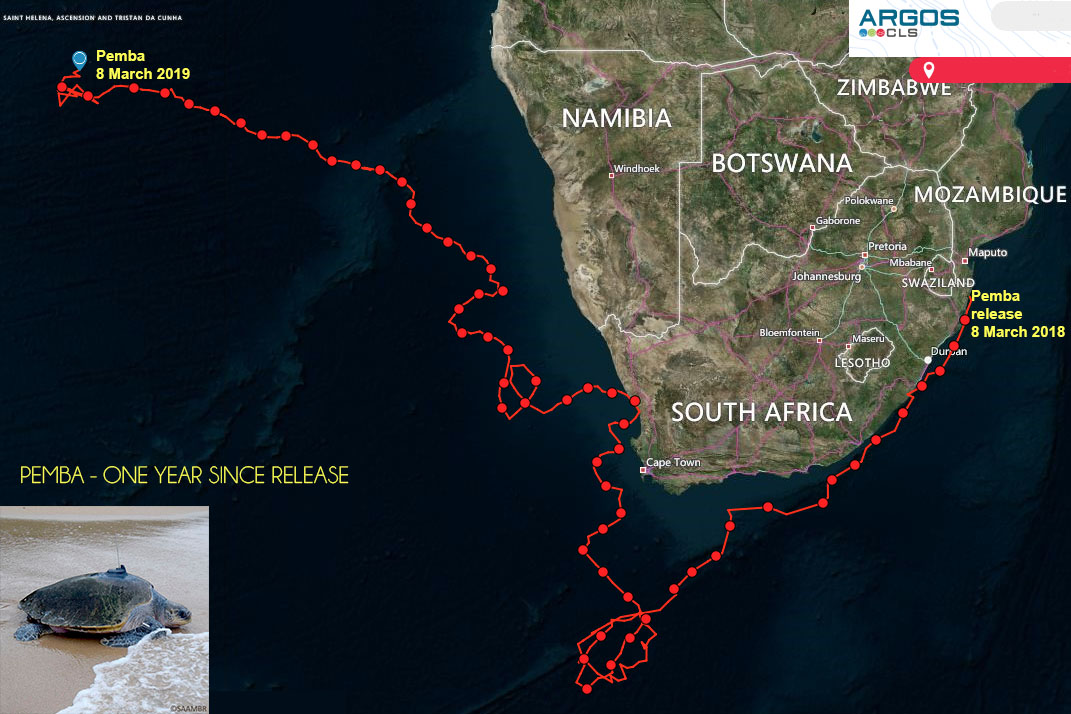