After 14 months and 21 727 messages, Pemba’s tag has finally stopped transmitting.

This is in line with what we expected. Although some satellite tags are able to transmit for longer periods, their transmission rates are much slower than Pemba’s.

Pemba has traveled an astonishing 16 664 kilometers (average of 39.3 kilometers per day), since her release on the 8th March 2018.  After making her way from KwaZulu-Natal she headed southwards away from the warm Indian Ocean to the cooler waters of the Atlantic ocean.  At one point we thought she was heading to Brazil, but then she veered back up the west coast of Africa.

Her last position was offshore, about 1 400km south of Liberia.

We trust that you enjoyed and appreciated following Pemba’s journey as much as we did.  We have learned an enormous amount about turtle behaviour post release.  Her rehabilitation journey, both at Two Oceans Aquarium and uShaka Sea World were challenging and took longer than for many turtles.  We are so proud that she has made so much of her second chance at life and trust she will continue to thrive for many years to come.

A special thank you to Maryke Musson from Two Oceans Aquarium for helping us monitor Pemba with her delightful and informative updates. 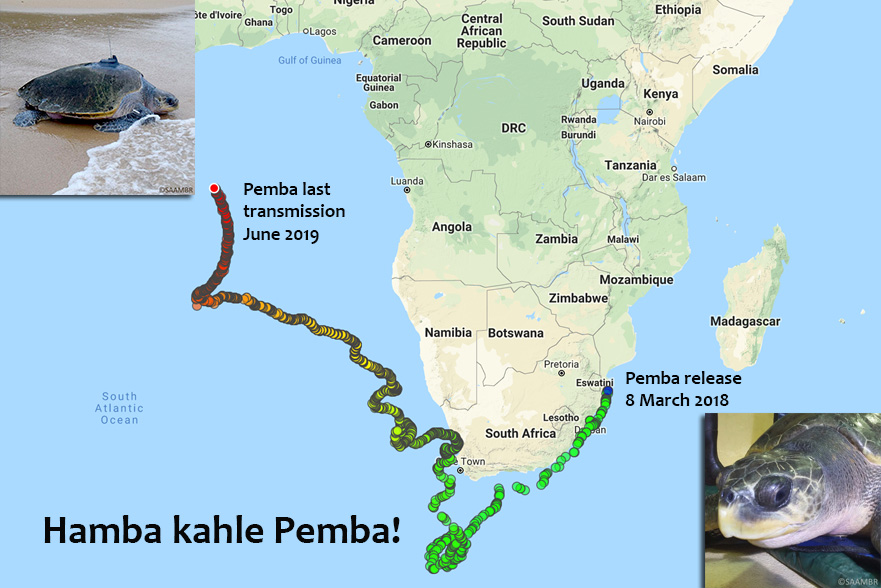