The devastating floods in KZN have been yet another reminder of the power of Nature. They have also reminded us of the scale of the plastic pollution problem. For many years, scientists have been telling us that plastics are a problem in nature; that animals are eating them and dying; that as they break down into smaller pieces, they enter the food web and may ultimately harm humans. But, because the problem was largely invisible, we treated these messages merely as ‘scary stories’. There are so many real issues to deal with that worrying about something that could not be seen seemed to be a waste of time and energy. Slowly, awareness of the plastic situation has been growing and the recent floods in KZN made visible the true scale of the problem. The floods of Cyclone Domoina in 1984 were devastating and the damage was enormous, but comparisons of photos from Cyclone Domoina and photos of the recent floods showed a stark difference: in 1984 mud and organic debris washed down the rivers in enormous quantities. In 2019, mud and organic debris were in some cases surpassed by enormous volumes of plastic pollution – pollution that was not at all evident in 1984.  So, in the space of 35 years, plastic has gone from almost non-existent to become the leading item washed down rivers during a flood.

Is there any good news? Well, some good can be taken from the fact that we are now all very aware of the scale of the problem; it is no longer invisible. And people are now taking action – from individual clean-ups and personal behaviour changes to changes in retail and industries, to innovative thinking around the production and use of plastics and the search for alternative products. Society is being galvanised into action, because we can see the impact of our actions.

One of the impacts of excessive CO2 emissions into the atmosphere is climate change. For most people the impact of climate change is largely invisible – just as plastics were 35 years ago. The big question is, are we just going to wait to feel and see the impact of climate change in our daily lives in a way as dramatically evident as the plastic problem? Or do we believe the evidence of thousands of scientists, the evidence of farmers dealing with changes in rainfall, communities impacted by extreme weather conditions, the evidence of biologists noting changes in species distributions and losses in diversity? If we believe that climate change is real, we can still mobilise ourselves, governments and industry and make the changes to society needed now – before it is too late for ourselves and our planet’s capacity to sustain us. 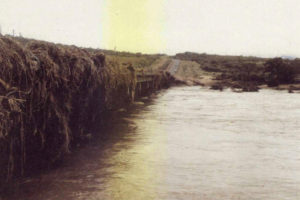 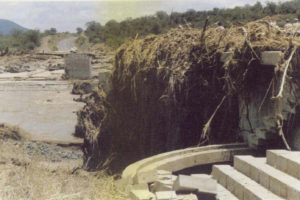 Cyclone Domoina - Remnants of the N2 road bridge over the Pongola River. 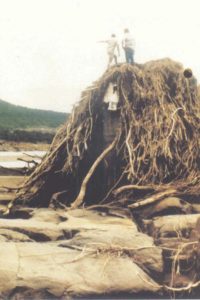 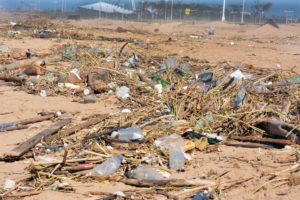 Blue Lagoon Beach at the Umgeni River mouth after the recent floods. 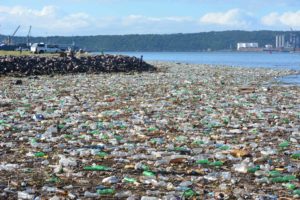 Plastic in Durban harbour after the recent floods.
PrevNext