A few years ago SAAMBR and the Two Oceans Aquarium were accredited by the Department of Labour to teach and qualify divers with a Class 6 Commercial Divers qualification.  This accreditation qualifies divers to dive to a maximum depth of 8 meters in a man-made structure where conditions are sheltered and pose no risk of entanglement or weak visibility. This class is ideally suited to match the needs of Aquarium staff whose duties do not entail diving in the open ocean.

Eight staff members from the curatorial and mammal and bird departments attended the course held at uShaka Sea World between the 8th and 18th April.  SAAMBR Senior Dive Instructor, Wayne Sumpton spent the first week teaching theory before allowing them to venture into the water donning SCUBA gear.  It is imperative that divers understand the impact the hydrostatic environment has on our bodies before they can begin diving. Being fully aware of the risks involved when using SCUBA (Self Contained Underwater Breathing Apparatus) and how to mitigate these risks was well covered during the course.

Once they had successfully covered the theory they entered the water and practiced communicating using hand signals and how to maintain their position in the water column. Learning to breathe and swim underwater takes both time and practice.  Once they had mastered underwater breathing they practiced using basic hand tools in order to familiarise themselves with what it takes to work under water. As the trainee divers spent more and more time in the water they became cognisant of the fact that their life as a diver depended on both comprehending and memorising what they had learned on the course.

All eight staff members passed their final exams at the end of the two weeks training and are now qualified and able to spend time in their exhibits observing animal behaviour and hand feeding their animals. 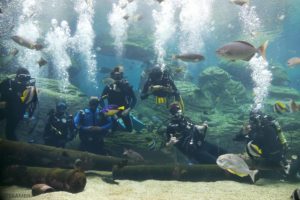